My extraterrestrial experience at Project Youngfish

Fostering entrepreneurship is admittedly one of the hottest trends nowadays. But far from being merely a passing phase, creating new entrepreneurs has become something essential in our society.

Once, entrepreneurs were only known as people who created a startup / business for very different reasons. In the last years, however, we have seen the rise of the entrepreneur in many forms: intrapreneurs, serial entrepreneurs, gurus specialising in just one market (IoT, e-commerce, fintech, etc.), and many others.

In this blog post, I wanted to talk about social entrepreneurship. Projects whose main goal is to create social impact, to improve the conditions of a region regarding one or many of the following areas: unemployment, pollution, access to clean water, poverty, access to school, etc.

Last June, I was invited by Makers of Barcelona to give a one-day lesson about sales and marketing in Project Youngfish. Project Youngfish is a two-weeks program for unemployed young individuals who want to kickstart projects with a high social impact. This edition took place in Valencia.

My class was included in the second week of the program, and it should see the different groups ironing out the last details of their projects, and preparing the demo show scheduled for the last day of the program.

I have to admit that I was tremendously surprised not only by the great ideas (everyone has ideas, in my opinion) but of their language skills – as the program is partly conducted in English – and their previous experience. Some of the participants had owned companies in the past or participated in really cool projects. I was taken aback, as I was expecting a less experienced audience.

Out of all the projects, I chose two as my favourites.

The first one, because of its creativity and vision. One of the groups, let’s call it Group A, wanted to create a B2B marketplace where designers could upload 3D models of tweaked IKEA pieces for companies and individuals to buy them. Here, not only the idea was great, but they had also created a business strategy that made a lot of sense, they knew how to monetise and even produced a video of the project!

The second one, let’s call it Group B, wanted to revive an abandoned market in the centre of the city. They combined the idea of pop-up events & pop-up stores in such a large and unused space. It took them a while to figure out their target audience, but once they got it, they immediately used it in their logo and landing page, which turned out to be really coherent.

Both Group A and Group B were composed by five or six individuals with very different backgrounds, but gelled in together perfectly with the rest of their respective group’s members. 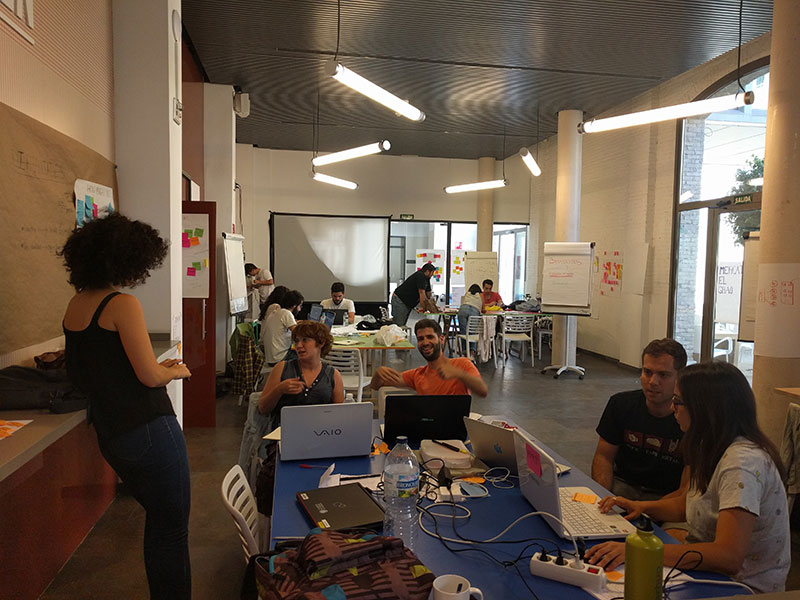 As impossible as it seems, I had to teach a Sales & Marketing 101 under 4 hours, for the morning lesson. I covered inbound, outbound, B2B, B2C, growth hacking, sales hacking, tools I use and practical examples of all the concepts I explained. Oh, and memes. Lots of them.

I didn’t give a very detailed explanation of any concept unless asked for it. I would rather have them learn a lot of concepts without really drilling down in any of them because their projects were really diverse, and what could be applied in one project might not be valid for the next.

As if that hadn’t been enough, I was also invited to give an after-work talk – beers involved – about community management. At MarsBased, we organise Startup Grind in Barcelona, where I happen to be the Regional Director for Southern Europe.

At Startup Grind Barcelona, we interview a leading entrepreneur every month. We’ve been doing it since April 2014 non-stop, hence growing a community of entrepreneurs. Our event, nowadays, garners over 100 people per edition, which is a respectable number, considering that the event is paid.

Probably, this was the funniest part of the day. After 8 hours of intense work, we all chilled out drinking a couple of cold home-brewed beers & talking about community management in a more casual way. I remember I dropped some bombs (I have very blunt opinions about certain topics) which helped spur the group conversation.

All in all, I was pleasantly surprised with the project and how efficiently it was run by the MOB crew and, as I mentioned above, more than surprised by the level of the participants.

I have kept in touch with some of them, and look forward to seeing their progress, should they decide to carry on with their projects (especially Group A & B).

Thank you MOB for kicking ass.