Tips for a 24h layover in Doha, Qatar

If you are a frequent traveller, chances are, you are going to have some long layovers. My most recent trip to Bali saw me stopping for 20 hours in Doha, Qatar, so I learnt a few things.

First of all, some background: I was travelling from Barcelona to Denpasar, Bali, to spend 25 days relaxing in south-eastern Asia. Since there are no direct flights covering this route, I had to choose between many different cities where I had to stop to change planes, so I chose Doha, Qatar, as I was flying with Qatar Airlines.

I actually chose a one-day layover so I could see the city, as I had never been in Qatar. I arrived at 8am and had to leave past midnight. Hence, I spent one day in the dusty capital of Qatar.

The Hamad International Airport is one of the most impressive and well-equipped airports I've seen in my life.

The staff are very helpful and there are signs everywhere, to ensure you do not get lost in such a big airport. Instructions are clear enough and I did not have any trouble to get out of & back into the airport during my transit hours. 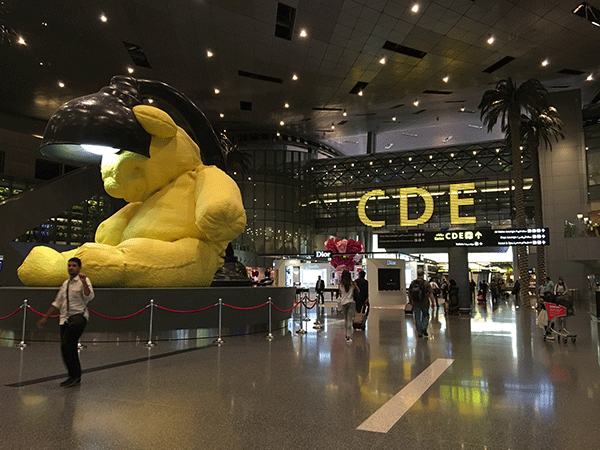 Also worth mentioning: if you're playing Pokémon Go, there are 5 gyms inside the airport and plenty of Pokéstops. Since I was required to come back two hours before my flight (made it three, just in case) I could spend them hunting around and I caught rare species! Well worth it!

Besides that, food in the Hamad airport is great, if only a tad too expensive. The variety and opening hours go beyond the European standards, where most places close at 10PM and offer just sandwiches, pizza and maybe a stand of local food.

You can get a SIM card at the airport. Vodafone offers 1GB SIM card for circa 10USD, which is fine for 24 hours. Do it: it's a life saver.

Let's go to the city.

Doha is the capital of Qatar, which is one of the richest countries in the Persian Gulf (some call if Arabian Gulf). If you want to learn more about it, JFGI. I'm not going to copy&paste Wikipedia stuff just to rank better. 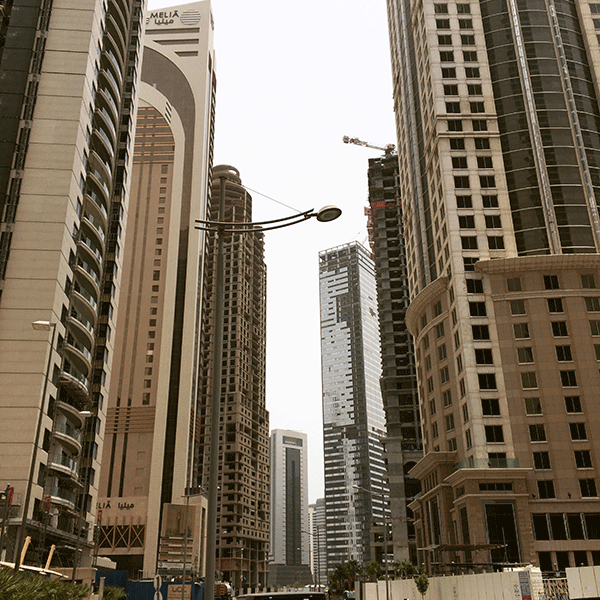 You can reach Doha easily from the airport, as it is barely 20 minutes away by car.

I used Uber, just because I do not trust taxi drivers at all. However, I have been told that in Qatar, taxi drivers aren't driving you around in circles. The only problem with local taxis is that since streets don't have names, and the city is under constant construction, they might not know where they're going. Also, most, if not all, of the local taxi drivers aren't from Qatar.

Uber solves all of that. Oh, and let me plug in my Uber affiliate link, in case you don't have an account and want to sign up for the service. All of this, for free, and shamelessly. You're welcome.

The city is not very big, and most sightseeings are in the same area. However, be prepared to see lots of luxury buildings and skyscrapers that make no sense whatsoever. As an artificial city, that's as true as it gets.

Like in all cities that are in the middle of the desert, all activity happens indoors. Do not expect to see people outside. I only found people walking at night, all along the Corniche Promenade, which is a nice walk along the sea. Even at night, temperatures were too hot at this time of the year (August).

Another two important things to mention are:

If you are here for work, and can work remotely, I suggest you go to the big hotels and work from their cafeterias. I, for one, went to W Hotel because Foursquare rated its cafeteria very high. I concur, food is awesome there, and so is coffee. But for those budget-savvy, I would not recommend this experience. It's a five-star hotel, and prices are well aligned with that.

A cheaper option is to look for a local café or a shopping mall. Wifi is also great there. Because I went on a weekend and very early in the morning, everything was closed except the main shopping mall and the biggest hotels. Hopefully, you will have a bigger selection!

If you are here for leisure, you might want to check TripAdvisor. I was totally deceived, as there are only churches & museums to visit. I'm just not that kind of person.

Doha is not a city to walk around checking nice buildings and randomly encountering statues or things worth Instagramming. One must needs take a taxi/Uber for everything. Buses, while well-prepared, aren't exactly useful, as they only cover main roads & you don't want to wait for them for too long under 50 degrees celsius.

If you're in Doha outside of the warmest months, a power walk along the Corniche Promenade looks like the thing to do.

At night, most of the skyscrapers and important buildings are lit, thus looking better for your shots. Some of them are pretty remarkable. Also, some of them host nice parties, I've been told. But since I was too down-dressed, I did not even bother going to any, as all of them have dresscode (polo or shirt plus long trousers for men). I was wearing a football t-shirt, shorts & running shoes.

As for the food, during weekends they have brunch / free buffets in most hotels and malls, which are very good options to taste the local specialities. I ate at the Main City Mall at a free buffet for the equivalent of 30USD, which I found a good deal given the quality and variety of food there was. Elsewise, I would recommend Zaatar W Zeit.

What not to do

August might be the worst time of the year to visit the city. It is plainly JUST TOO HOT. My phone alerted me, but I decided to go for a 15 minutes walk to reach the city center after I spent a morning working from a hotel. 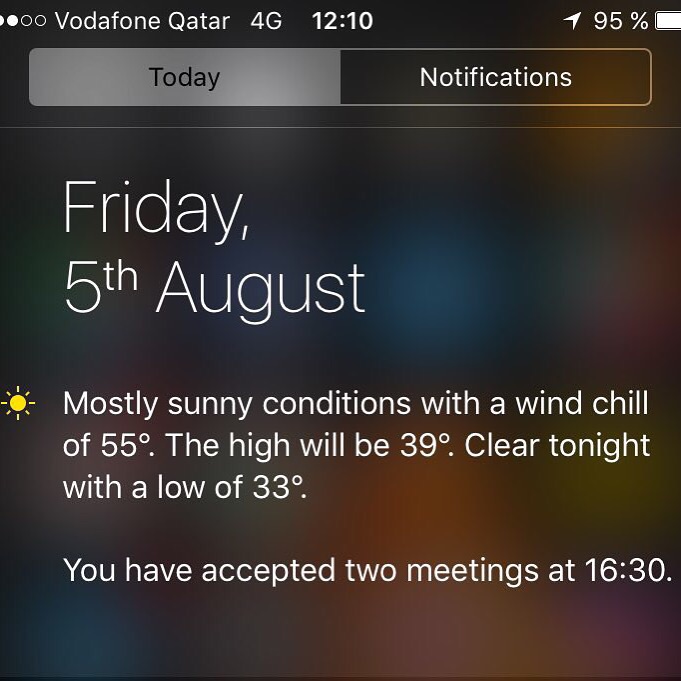 Full disclaimer: Temperatures are in celsius.

Five minutes in the walk and I was soaked to the bone as if I had been thrown into a swimming pool. Therefore, I would suggest not walking under the sun during the hot season, which is most of the year.

People were yelling at me from their cars asking me what I was doing or giving me weird looks, as I was the only person walking the streets. In 15 minutes, I encountered no one going by foot.

As stated above, consume bottled mineral water. Do absolutely not drink from the tap.

I would also recommend avoiding rising too early. During the weekends, Qataris stay at home until well past lunchtime, and won't most likely go out until it's dark. Then, they go to the mall. So until 4PM, malls are deserted.

Last, but not least: one would expect that temperatures drop when it's dark. Not in Doha. During the warm season, the temperature is constant throughout the day, and when it's dark, it just becomes even more humid, thus becoming extremely unbearable.

That was my experience for almost 24h in Doha, Qatar, in between two night flights. Hope you found it useful. Feel free to share your experience in the comments section below!