RAGE, in my opinion, is one of the most underrated metal bands ever. Period. 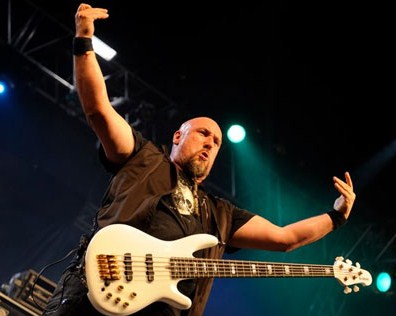 The Bochum-based band RAGE has been spearheading German metal for well over three decades already. I got to know them in 2002 when they released Unity, at the peak of their career, with one of the most solid power trios ever known in the metal scene: guitar virtuoso Victor Smolski, the almighty Mike Terrana on drums and Peavy Wagner as the mastermind of the band, on bass guitar.

Unity, for many, was a ground-breaking album that pushed the limits of what we'd call "metal". While it wasn't the hardest, fastest or most extreme album ever, it blended perfectly the classical heavy metal with rather uncommon guitar distortions, catchy choruses à la punk rock style, a bluesy-meets-neoclassical guitar soloing vibe and, most important, the solidity and heavyness that only such talented musicians could bring to life while being just that: only three.

Before they published the sequel to Unity that would consolidate Rage on the elite of European metal, Soundchaser, I listened to their previous albums and quickly became a huge fan.

For the non-metalheads in the room, I reckon RAGE is a very appropriate band to start listening to metal. In their more than 20 albums they have touched almost every variation of the genre (except the extremes: black, death, etc.) while flirting with classical music or more poppy melodic metal like Ghosts.

But back on topic: I am a huge fan of versions. I spend lots of time watching and listening to concerts just to hear different versions of the same song. Some of my favourite songs happen to be the acoustic version of a band's most acclaimed song.

Although RAGE have never toured doing only acoustic stuff, and I hope they never do, I would like to see a concert or two just with acoustic versions of the following songs.

I selected the 21 RAGE songs that I think they would make good acoustic stuff and that I like the most! Here we go:

I imagine the concert would start with easy songs, mostly ballads, since it's an acoustic concert. That's true for the first four songs. Or five, as I guess that The Mirror in Your Eyes would make an excellent ballad if they ever decided to record an acoustic version.

Then they would speed up with Turn the Page, Great Old Ones, Sent by the Devil and Don't Fear the Winter before slowly returning to the calm with French Bourrée, which would introduce the ballads moment until Falling From Grace would kick in.

From this point on, it's mostly classics and sing-along songs with catchy choruses, peaking at Set this World on Fire and one of my all-time favourites Back in Time before wrapping it up with the typical show-closer Higher than the Sky.

I would really fly to virtually anywhere in the world to see this concert.

I have actually created a Spotify playlist with the originals, so you can actually get a first impression of how it would sound like. You can listen to it here.

Treat yourself to some RAGE and rock on!