I have been using FollowUp.cc for months and I think it's a great product, but it's got three major issues that need to be solved ASAP.

For those into sales, you know that following up with your sales prospects & leads is one crucial task that requires a lot of attention.

Business developers like myself, or sales people per se need to track dozens, if not hundreds, of deals over the course of the week. And, while in the past this was tracked down manually with a lot of diligence and dedication, nowadays we have got tools to automate this process and help us to deliver a better customer treatment.

I had been using Evernote's reminders in the past until I found a dedicated tool for this: FollowUp.cc. FollowUp.cc is a great tool that helps you to set reminders and automated responses for your email, and after using their free testing period, I decided to go for the yearly subscription, which I gladly paid upfront after a very good first experience.

Coincidence or not, the product started to break almost right after paying the yearly subscription. I found some bugs that might only happen to me, but I'd like to share them here so someone else can find about them and not feel alone.

Some features disappear or behave randomly

FollowUp.cc is a Chrome plugin you install and give access to your email to get extended controls over your inbox. You probably used similar plugins such as Streak, Mailtrack or Better Gmail in the past.

The thing with Followup.cc is that it disappears randomly, sometimes in the middle of an email, thus forcing you to reload the Gmail interface to get it back.

While this is not entirely disturbing, it's kind of inconvenient because it happens randomly and you cannot anticipate when it's going to happen nor try to avoid it.

Sometimes it does not disappear entirely, but it folds its sidebar so it cannot be unfolded.

That sidebar contains the settings, information about whether the emails have been read, integration with Salesforce and other useful stuff. Sometimes I can open it, sometimes I can't.

Finally, in Followup.cc, there's an option to snooze an email. If you snooze an email, the app archives it for a given period of time. However, my experience has been different every time: sometimes the email gets archived, sometimes it doesn't. You can't predict it, and I actually haven't tracked whether it bounces back to the inbox when it should or not.

Which might actually be the cause for the next issue…

I'm getting notifications for random emails

The previous errors are understandable because I might have conflicting plugins, a conflicting Gmail inbox setup or other stuff interfering with FollowUp.cc's own nature. Every software breaks every now and then.

However, this thing is absolutely wrong: I started getting reminders for emails I had never set a reminder for. 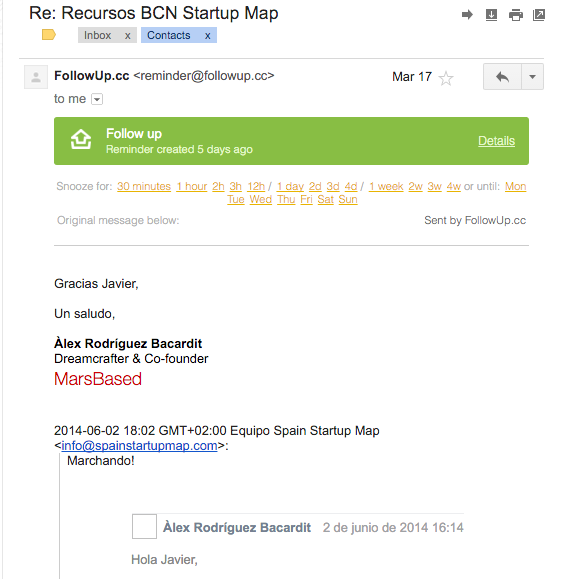 See? This email was sent in 2014. I didn't have Followup.cc set up back then. Heck, I am not even sure FollowUp.cc existed yet. Why would I dig this email up and set a reminder for it?

My guess was that the snoozing feature sometimes didn't select the right email, assigning the reminder to older emails. So I decided to stop using it and, much to my dismay, these random emails kept popping up.

That means the reminder you set when sending an email might not be functioning well. I mean, the one you set down here: 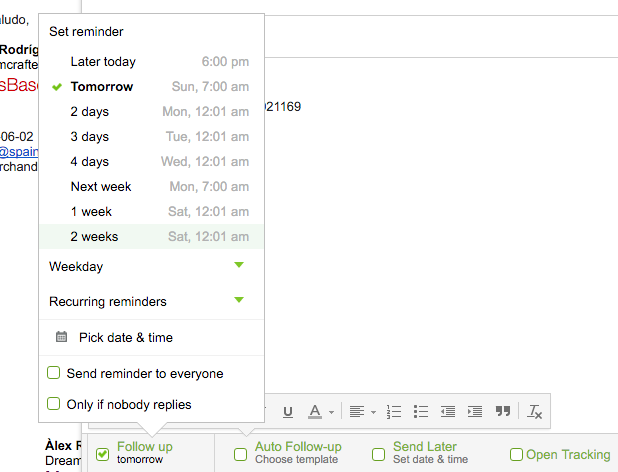 That, I found really disappointing and terrible for my business. I might have missed out on important emails because the right notifications/reminders haven't reached me.

I can't stand the idea of losing deals because of a broken product.

Their support team is really slow

This is technically not a bug, but as a paying customer, I think I ought to have received a better treatment.

I am a developer, so I like to report broken stuff and offer all sorts of information to help other developers to fix their bugs. I try my best to submit all the information I can such as the browser I am using, its version, some screenshots, steps to reproduce the bugs and lately, thanks to Screen-o-matic, also videos - like the one I showed above.

When I started finding bugs, I emailed FollowUp.cc's support team to offer help and report the issues. Most of the times no one replied, and when they did it was because I followed up, but they replied almost always more than two weeks later.

Some emails went unnoticed and unreplied:

So I eventually became frustrated, angered and disappointed. I also wrote this email above behaving like an ass.

I can understand that things break, but your core functionality cannot be broken for that long. And, at least, try to give me some feedback if I write complaining.

However this text might sound, I did not write it out of spite or malice. I just wanted to share my mistake of being too over-excited about something that was not ready yet and I should not have paid a year upfront for.

PS: The Followup.cc guys have actually written back and refunded me, being nice and attentive. I hope they get the love, attention, and resources they need to get back to the quality standards they should meet and that they finally succeed.