Come on Vueling, we can still be friends

Six months ago I wrote this, but decided not to publish it. However, after yet another unfortunate event with Vueling, I decided they deserved to be called out.

Sit down. Here, here. We need to talk.

It’s not me. It’s you. And we need to talk about it before it gets worse.

Remember five years ago? Does the name Eyjafjallajökull ring a bell? It’s not about her. I’m not into volcanos anyway.

In 2010, I was flying from Greece to Barcelona, with a stopover in Milano Malpensa. My flight was scheduled to depart at 21.00 and arrive in Barcelona at 22.30.

Because of an air-traffic controller strike in France, our flight could not leave, and we suffered a delay of five hours and a half — we left at 1.30. I made it home at about 4.30 in the morning. Considering I had to wake up at 7.00 to go to work (yes, it was a Wednesday), I felt pretty bad.

If I had arrived at 22.30 I would have taken public transportation and be home for less than 2 euros. Instead, I had to take a cab and pay about 50. I also would’ve slept before going to work.

In Milan, there was nobody giving explanations while we helplessly saw how other flights (more expensive, so maybe they could afford being re-routed through a southern route) were departing with no problems. Our flight, however, stayed. And there was nobody to talk to. The airport people told us to complain to the Vueling staff, which were nowhere to be seen.

I filed a complaint asking for, at least, the compensation of the taxi price. All I received from you was an “I’m sorry. I will not do it again”. You can check the flight number (VY6335) for October 12th, 2010.

That’s ok. I think I deserved better, but this is how relationships work: once you win, once you lose.

Since there until now it’s been a problem after another. You’ve been sometimes late, your mobile app is nothing short of useless (I have to input the reservation number and the airport every time for the flights I already have? Seriously?), sometimes I receive the boarding passes — while others I don’t and I must go to the counter — not to talk about the service on board. But hey, I have never complained.

I am a patient man.

I will also remember the good times we had when I took part in your first Business on Board last year, going to Milan (coincidence?) and back. It was a fun ride.

But two big fuckups in such a short time are enough.

I had for the first time in my life bought an Excellence ticket to come back from Mykonos at 6am in the morning. I never buy “business class” tickets but this time the difference was not big, and I thought to myself “hey, after a month in Greece, and being so early, I might as well go with something more comfortable”.

Not only I found it useless: speed boarding only valid for Spain, VIP areas only in Barcelona and I didn’t get anything extra besides the extra snacks. I also felt something was going to go real bad when they told me I could check in my hand luggage for free, which I kindly refused, as I know that means it’s going on a different flight. The staff there forced me to do it.

Little surprise: I arrived in Barcelona, and guess what? My luggage was not there. Some other people’s luggage were lost as well.

I lost three days of work because of that (my hard drive was there, plus some USB sticks and material I needed to work).

This is the ordeal I had to go through to get my luggage back:

This one really has forced me to publish this.

I booked a flight for a friend’s party in Hamburg. Turns out, the event was happening later in the month. My bad: it’s OK, I’ll pay the fee and I’ll change the booking.

Not really, that literally translates to “With Vueling, you can change the date and time of your flight up until two hours before the departure. We give you all the flexibility you need!”. 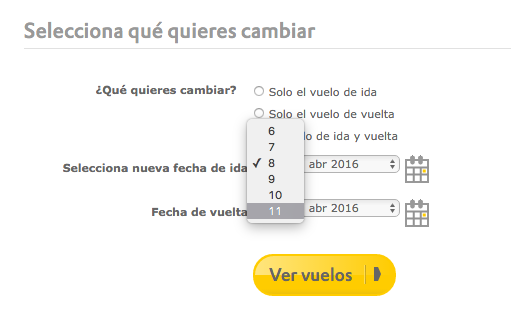 Three days before & after the booked departure. That is “all the flexibility you need” according to Vueling. Way to go!

According to the website, you can call their center or send them a message, both of which I did do.

Phone: all lines busy, long waiting, sending from one person to the other. All of this, being charged. Of course, they offer no free number. Nothing solved in the end. I am a busy man, can’t stay one hour hanging by the phone.

Message: I sent them an email asking for two things: how can I change a flight to dates I can’t select through the website and a free Customer Care phone number. Two days after, I received this worthless email: 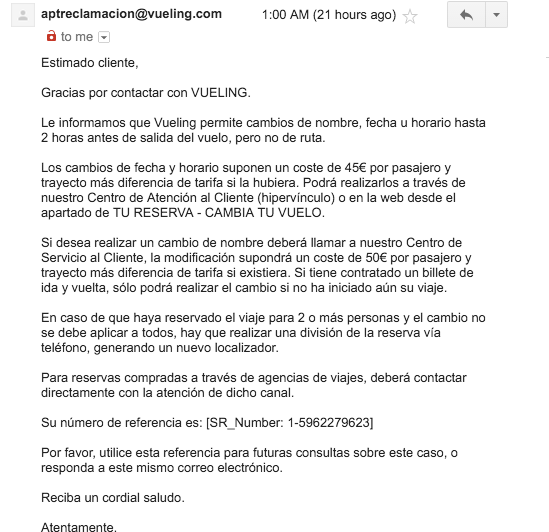 I received a generic email, with the information that’s on the website.

I do not ask you to write my name in the email, nor that you wish me a good day or that you’re really sorry about what happened and that you’ll try to help.

You just fucking shoved me the FAQ content in the face.

Vueling did not even attempt to answer my question, nor did they include the free number I asked for. They didn’t even read my complaint.

So I decided to cancel my booking, which I am entitled to, provided I pay a cancellation fee. Vueling says that you cannot cancel your booking so you dismiss the idea of issuing a complaint, which is a blatant lie.

This is Vueling’s cancellation policy. Spanish for: 'dear client, fuck you'

That’s it. I thought we could still be friends, but it’s not me: it’s you. We’re through.

This post was originally published on Medium on 2016-04-06: Come on Vueling, we can still be friends.