After a year of throwing away stuff, I’m going minimalist

Every time you move into a new house, you realise how much stuff you own. It is equally true, that the amount of things you own tends to increase with time, so every time you change house is a bigger nightmare.

In the last ten years, I changed house four times, and I feel that I should be changing again rather sooner than later. The thing is, up until now, I only owned enough stuff to fit a room or two, but for the last six years, I’ve owned a house, with all its appliances and furniture.

I really do not look forward to moving out with all of this. 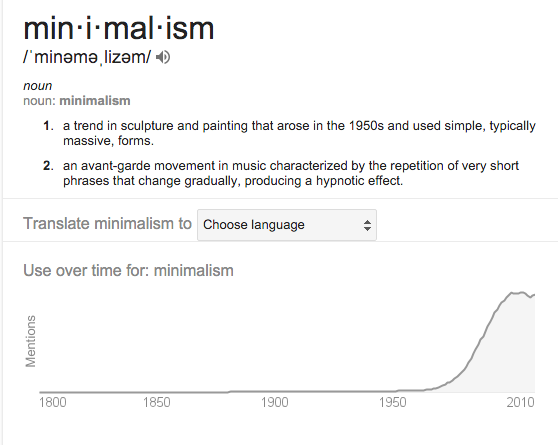 Minimalism has been a trend in quite a lot of disciplines: from art to education, but also in pedagogy and music. In fact, the picture above is what you get if you type “definition of minimalism” in Google.

However, the kind of minimalism I am embracing is the material minimalism. You’ll find a really good post about it by Buffer’s Leo Widrich here. In short, trimming down your list of belongings to a minimum.

Last year I wanted to include it as a new year resolution but had too much stuff on my plate to actually focus on this. I did, however, get rid of 300 items, so almost an item a day (there was a heavy spring cleaning that maxed that number). So without meaning it, I accomplished it.

This year I did include it in my new year resolutions, which I will publish later on. My commitment is to get rid of an item every day of the year. In order to track this, I created a public spreadsheet that I will be updating daily. You can find it here.

How to do it

It’s easy: once a day you find an item you can either sell, give to a friend or throw away. Some tips:

My reasons to do it

First and foremost, because I realised clutter takes space. Not only that, but it brings a lot of distractions. Consider that at the time of writing this blog entry, my desktop looks like this: 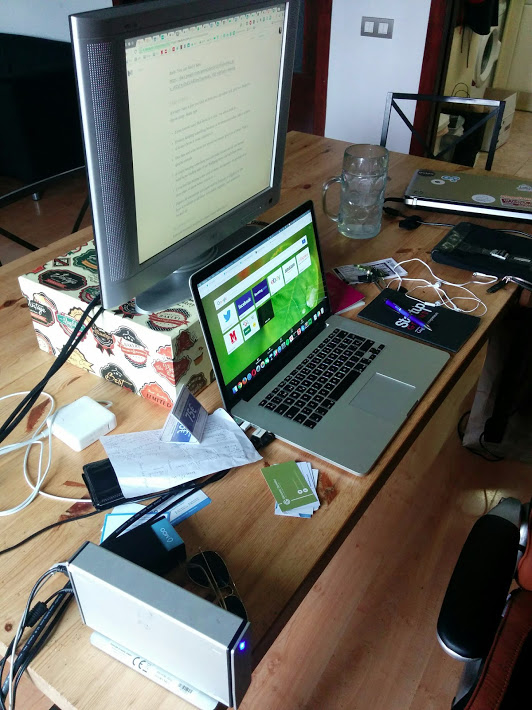 In contrast, with a much cleaner desktop, I can focus on my laptop, instead of on any of the surrounding distraction-inducing elements. 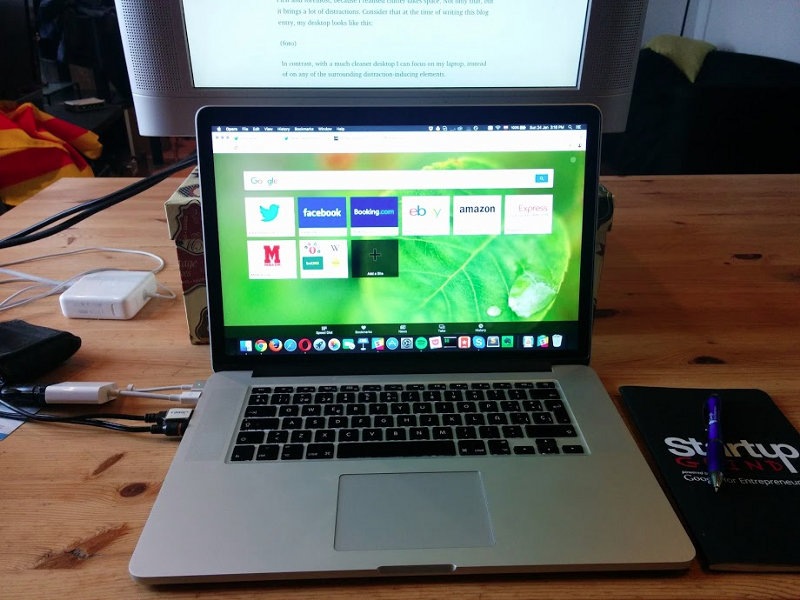 Also, as mentioned above, I don’t want to face another move with this amount of belongings. I am going to save a lot of money and time if I slowly declutter one thing a day.

Keeping too much stuff at home might trigger the development of Diogenes Syndrome, so I wanted to play it safe.

Another big reason is because I plan to travel around the world for a good while. Last year I committed to planning my trip around the world for 2017, so I’ve got only one year to make it true. I will have to store my stuff somewhere, so the less I have, the easier it’ll be.

Have you had any experience with going minimalist? Do you plan to do it but can’t find the time? Share your story below!

Last, but not least, I do not find any satisfaction in owning a lot of stuff. We tend to accumulate stuff partly because we do not know how to deal with it when we get them. Therefore, we store it in a cupboard or put it high on a shelf and delegate dealing with it with our future selves. If I could travel back in time I’d kick my past self in the head for forcing me to deal with this now.

This post was originally published on Medium on 2016-01-28: After a year of throwing away stuff, I’m going minimalist.